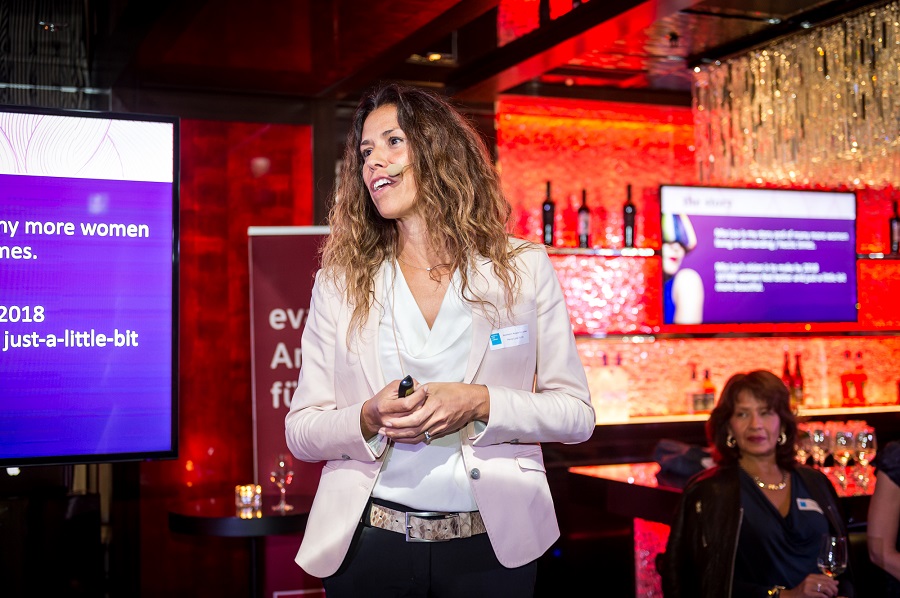 Maria Luisa Fuchs leads Startup@HSG's Female Founder Initiative at the Chair of Entrepreneurship. The initiative supports women who want to start their own businesses. Fuchs, a business economist, coaches future entrepreneurs and encourages women to turn their ideas into reality.

14 January 2022. "I could become a founder!" Maria Luisa Fuchs wants HSG female students to realize this could be them. Half of the students at Swiss universities are women. But only about 35 percent of entrepreneurs are female. Just 10 percent women found a start-up. "That has to change," she thought to herself and went on to launch the Female Founder initiative at the Startup@HSG Lab of the "Center for Entrepreneurship" in 2019.

Inform, support and network
There are three pillars to the programme, which include information, coaching and networking. "Being a female founder can be learned. We accompany women on their way as entrepreneurs. We impart know-how and stand ready to support with our experience. Going out with their start-up concept and receiving support is something women have to do themselves," says Fuchs. In 2019, the first event for future female entrepreneurs and founders took place. Alumnae, i.e. former HSG students who have since founded their own companies, discussed with around 20 women in the MakerSpace, the meeting place for start-ups and creative minds at the HSG. Successful female entrepreneurs are important role models for the female students. Young female entrepreneurs like Léa Miggiano with the car subscription Carvolution or Melanie Gabriel with Yokoy, an expense report start-up, as well as experienced HSG alumnae like tech entrepreneur Nicole Herzog from Sherpany or serial entrepreneur Bettina Hein provided information about their careers as part of "Ask the experts".

Compatibility and perfectionism as career traps
Why do women start up less than men? Especially in Switzerland, where the conditions – legal, economic or educational – are ideal? The reasons are complex, says Fuchs. She herself is a mother of two, sees a decisive disadvantage in Switzerland in the still conservative structures for reconciling family and career. "Switzerland is not set up for mothers who want to work or start their own business." Women also often get in their own way with their perfectionism, she said. "It's enough to do a good job – it doesn't always have to be perfect." Especially with start-ups, that might not be the case at all, because you iterate and work with prototypes before launching. But many women think, "Only when my product or website is perfect do I dare go public."

How women become board members
Fuchs is herself the founder of a successful start-up. Continuing education and networking events are indispensable when starting a business, she says. Fuchs raves about the numerous Swiss networks, which she experiences as very democratic: "People meet each other at eye level, regardless of position and hierarchy." However, no one can take the step of exposing oneself with one's own company. She also had to experience that herself. "I learned a lot by trying things out," says the founder. The business economist has also been a member of the board of directors of the Rorschach-based family business Molkerei Fuchs for seven years – the first woman ever in the company's history. Since 2021, Fuchs has also been on the board of Kornhaus Bräu, the Rorschach specialty brewery. How do women make the career move to the board of directors? Networks are crucial, she says. "I also have to be aware of which companies I want to advise as a board member and what contribution I can make to the company: What is my expertise? Of course, you also have to be willing to take on responsibility – including financial responsibility. It's always about the same thing: Know what you want. Then get out there," says the two-time board member.

Creativity as a resource of less developed countries
Maria Luisa Fuchs is originally from Venezuela. She has lived in Europe for more than twenty years and in Switzerland for many years. The 49-year-old notes differences between her home country and Switzerland: "In Switzerland, it's easy to start a company. Money is available. Ideas, too. But sometimes it fails when it comes to implementation." Prosperity can limit creative potential because then there is less pressure to implement and change something. In developing countries like Venezuela, creativity is a resource for driving change. Moreover, in poorer countries, it is economically imperative that both men and women work. Women founders often have to provide financially for their families. However, this only works thanks to stable communities of family and friends.

"Speed dating" for future female founders
Each spring and fall, the Female Founder Initiative organizes pitches for aspiring female entrepreneurs. On May 3, 2022, the next pitch session will take place. At the pitch, the women have to get to the heart of their project within 90 seconds and present their idea on a slide: What problem will be solved and how? How far advanced is the project and what support does it still need? It is not only about funding, but also about possible co-founders and networks. After the presentation, each woman gets the opportunity to have a short interview with an investor. After this "speed dating," the female founders can then approach potential investors bilaterally. At the previous event last November, Fuchs was impressed by the versatility of the ideas: "Wow! How many different ideas are taking shape, from MedTech, Fashion, FemTech to Agronomy and Food." For example, a machine was developed that measures nutrients that are important for agriculture. Or a sustainable rental platform for so-called circular textiles – i.e. clothes that can be reused – was launched. Not only are the topics diverse, but so are the women's educational backgrounds and life situations: For example, she says, in addition to the bachelor's graduate, there was also a middle-aged woman with a doctorate who wanted to start her own business after focusing on her family.

In Switzerland, only around 7 percent of women who found a start-up currently receive an investment. This could be due to the fact that women are less confident than men when it comes to pitching. In addition, most investors are male, and they are more likely to support men. But also crucially, "You don't get anything if you don't ask!" says Fuchs.

From "dreampreneur" to female entrepreneur
In addition to the events that provide expertise and information on the existing range of services, mentoring is an important form of support. This takes place on an ongoing basis. Many women have an idea and would like to start a business, but then hesitate to implement it. Mentoring is intended to close this gap between the "dreampreneur" and the entrepreneur. Mentors, including Fuchs, accompany the women for three months. "Of course, professional questions come up, but it's also about psychological factors. I'm almost a bit of a life coach," laughs Fuchs.

Original Post by the HSG From "Dreampreneur" to Entrepreneur | Knowledge | University of St.Gallen (unisg.ch)